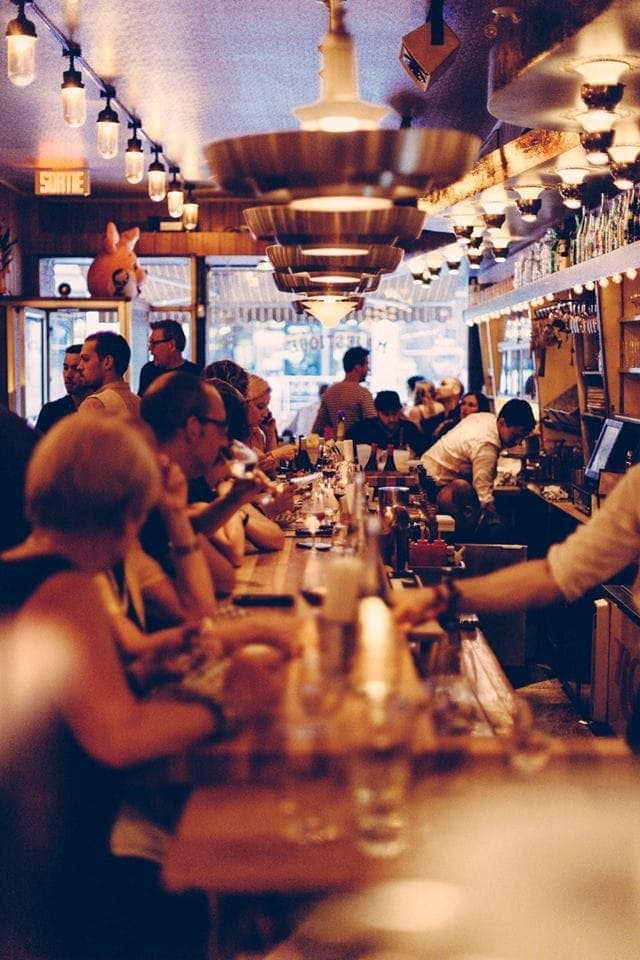 Majestique Bar opened in 2014, and is known as one of the best bars in Montreal for dining and oysters.

Initially, there was a lot of noise made about Majestique, since the famous chef Charles-Antoine Crête had been hired to create the menu. Charles stayed a few months before going on to open his own restaurant, Montreal Plaza and after he left, the young chef and now co-owner, Dominic Lalonde (ex Toqué!) took full charge of the kitchen.  Since then, he and his team have been preparing superb small delights for Majestique’s patrons. Despite his young age, his talent and work distinctly show his talent and carefulness.

At Majestique, the small plates are always prepared using good quality products and are also very well made. We have a weakness for some house classics such as the outstanding 12″ hotdog ($22 but well worth it) made with a Gaspor pork sausage, and served between a Hof Kelsten bun that’s been slathered with good ol’ yellow mustard, spicy mayonnaise, cabbage and fried leek slaw – WOW!  Then there are the whelks in brine, sauteed in a herb butter with parmesan, nori, dried seaweed, Skipjack tuna, spices and fries – some of the best in Montreal. We also like the braised Gaspor bacon, with celeriac and broccoli. The menu does changes a little with the seasons and during the summer there are more vegetables, fruit and salad choices.

Did you know that Majestique serves a Sunday Brunch?

Majestique is also one of the best oyster bars in town where the oysters they serve are meticulously selected by the very knowledgeable Max Ruiz Lang (Choice Harbour, Loïc). Unlike larger oyster bars, Max will look further afield, if necessary, to choose only the best oysters. These are oysters that need to pass the “Lang quality test”. And only then are they shucked by the two professional “artistes écailleurs”  or ‘talented oystershuckers’ – François Séguin and Alexandre Hallé Quinlan. Oyster connoisseurs will tell you that what adds to the oyster tasting experience is not only when the oysters are professionally shucked, but also when they are served with the likes of a classic or apple mignonnette, freshly grated horseradish, lemon and Tabasco. Most oysters are around $3 apiece, but at Majestique, the more oysters you order, the cheaper they are.

Majestique’s main shareholder is Richard Holder and David Pagé is the General Manager. Like other bars where you can eat well, Majestique alters the concept of thinking that eating out has to be expensive, by allowing you to eat a very good meal, drink a very good drink, and still at affordable prices. Obviously, if you decide to have an evening of full-on eating and drinking, then this will not be the case. Neverthless, it is possible to come to Majestique and eat fries, drink a beer, yet still have a memorable time.

Charles Couture Tarzi (Le Fantôme, Damascus, etc.) is behind the wine list which is mostly composed of private imports and does change on a regular basis.  “We like to work with small artisan producers, who barely manipulate the vines and use as little sulphur as possible.”  Majestique lists some very interesting wines at less than $40 per bottle (before tax) and also cater to the cocktail crowd, thanks to Benoît St-Hilaire.

The decor has a somewhat “kitschy” look about it that is still intimate and original, thanks to Thomas Csano’s design.  With about 60 seats, it could be Ali Baba’s cave, filled with numerous mismatching objects that still manage to work well together. The unique decor sets this spot apart from the rest, and we’ve even included it on our list of the most beautiful bars in Montreal. One thing though is certain – Le Majestique is a welcoming space where you feel at home, relaxed and in a good mood.

What makes Majestique a success is the festive atmosphere plus the quality of their products on both the food and wine menus.  And we want to add the following –  it is open every day until 3am, with the kitchen closing at 2am!

Butterblume officially opened its doors in June 2016 on Boul. St Laurent, between Aves Bernard and Van Horne. With an attractive decor, friendly staff and absolutely delicious food, this charming […]