Montreal’s best poutine: Where to eat an amazing poutine

Are Montreal’s best poutines really gourmet food? We certainly think so! When we talk about Quebec gastronomy, and let’s remember that gastronomy is a word associated with « what we eat », poutine simply can’t be ignored (pronounced « poo-teen, yes – poo-teen!). Poutine is becoming more and more famous around the world, and continues to make inroads on some menus in parts of Canada.. And poutine is such comfort food. We know it’s popular – we’ve witnessed overflowing restaurants at 4am, with customers clamouring for this unique delicious food!

The book « Maudite Poutine », (That Damn Poutine) published by Héliotrope, mentions that « Quebec gastronomy is really like a lumberjack’s kitchen and not advisable to eat if you are dieting ». Maybe that’s why Quebeckers tend to be so cheerful? We enjoy life and this is reflected in our cuisine. And just to get us through the lethargy and harshness of our winters, of course it can help the soul to eat the kind of things that dieters would never touch!

The origins of poutine are controversial. What we do know is that this traditional Quebec dish first appeared in the late 1950s in central Quebec (where coincidentally, many Quebec cheese producers specializing in cheddar cheese curds are located). 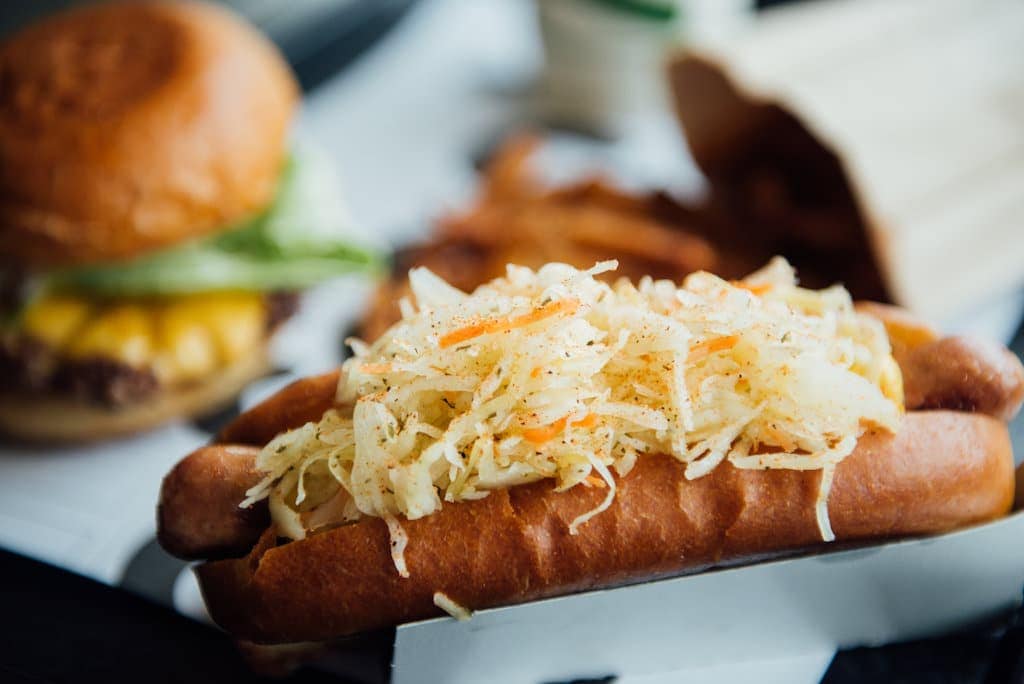 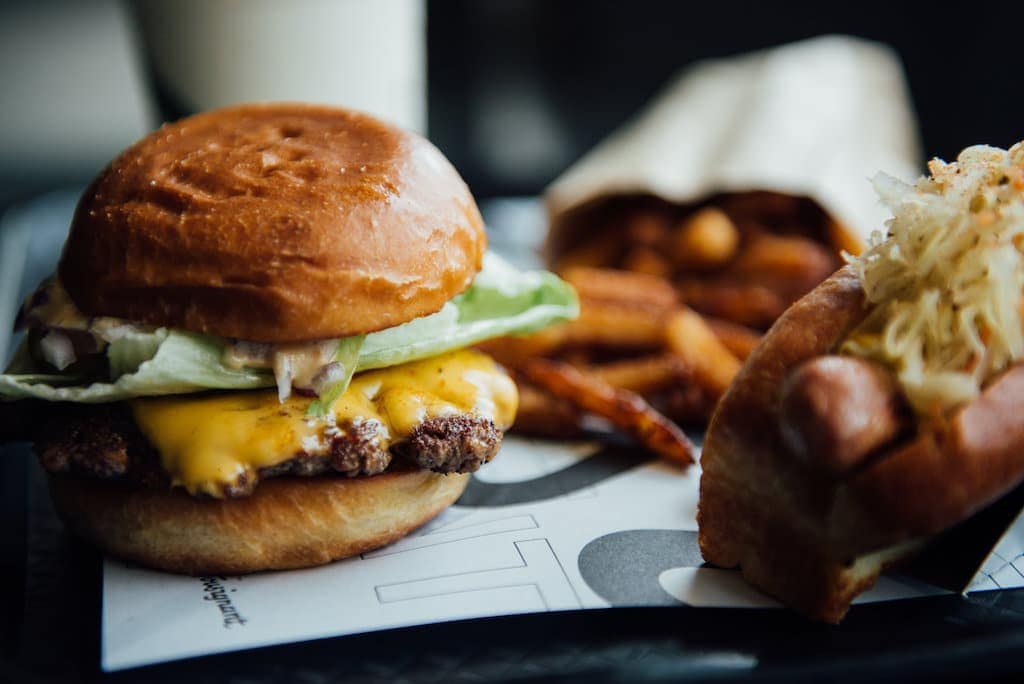 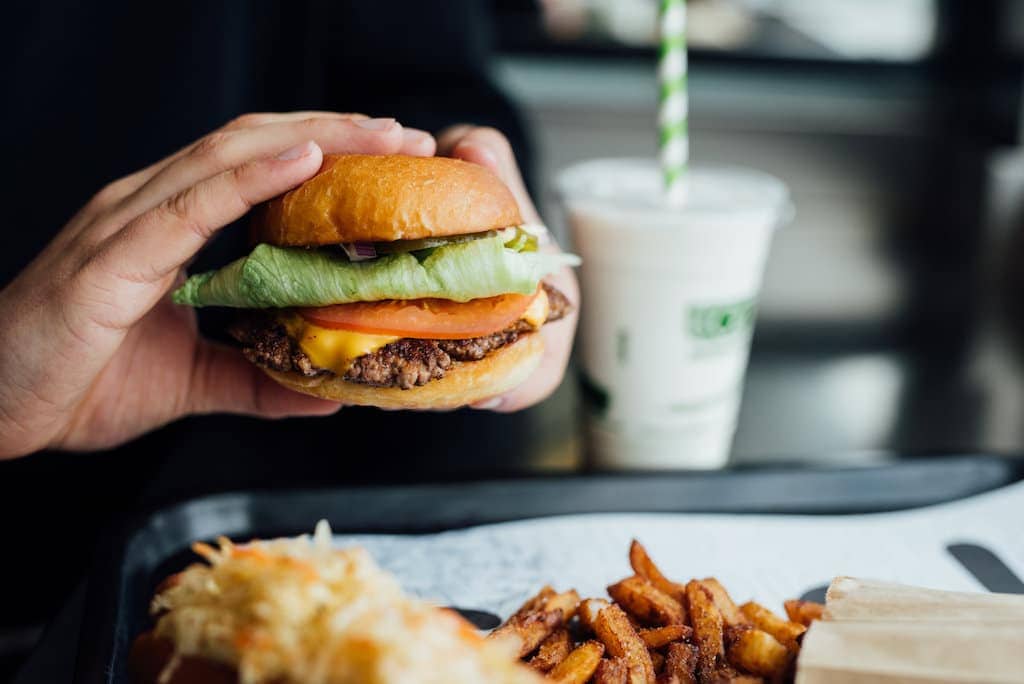 This exceptional little snack bar offers a canteen-style menu of Quebec dishes where you can eat one of the best poutines in the city! The retro decor reminds you of a diner right out of the 1950s and 60s. They serve a classic poutine made with Quebec-grown potatoes, sprinkled with Tousignant’s own spice mix.  These are then topped with Quebec-sourced cheese curds and a chicken gravy. There are both small and large sizes.
Get more information
Gibeau Orange Julep, Decarie Boulevard, Montreal, QC, Canada

Julep’s doors were opened by owner Hermas Gibeau way back in 1932 but the huge orange-shaped structure only appeared later, in 1945. Julep has been at its present location on Blvd Décarie since 1966 (51 years!). This is your classic fast-food kind of menu but the inside of this huge orange ball-shaped structure counts as a must-see place in Montreal. The specialty is, as the name suggests, Orange Julep but the poutine is also great! During the summer, Julep is open 24 hours a day.
Get more information
Patati Patata Friterie de Luxe, Saint Laurent Boulevard, Montreal, QC, Canada

Patati Patata is a charming “Friterie de Luxe” on Blvd Saint-Laurent, serving its customers for over 20 years! Don’t be taken aback by the small size of the place because you’re here for the excellent poutines not the location. This is a place of mythical proportions, along with their classic poutine. The portions are reasonable, not enough to give you indigestion but certainly enough to satisfy any cravings. Patati-Patata also offers their “patatine” version with mushrooms, onions and peppers.
Get more information
Pataterie Chez Philippe, Rue Atateken, Montreal, QC, Canada

Chez Philippe Pataterie is a pataterie just the way we like it. Another longtime Montreal establishment (opened in 1962), it is a true ‘greasy spoon’ serving excellent poutines. There are 4 sizes : small, regular, large, and family. There’s also an Italian poutine in the same 4 sizes.
Get more information
Restaurant Chez Claudette, Laurier Avenue East, Montreal, QC, Canada

Oh my! Choose from 35 different poutines chez Claudette! This is a classic Plateau Mont-Royal restaurant where regulars come to enjoy a classic breakfast or a great poutine and are always made to feel welcome. Some want to eat quickly and go, others stroll in and read a book. Even if they offer some of the most original poutines, it’s the classic one that keeps bringing us back either in the small or large size.
Get more information 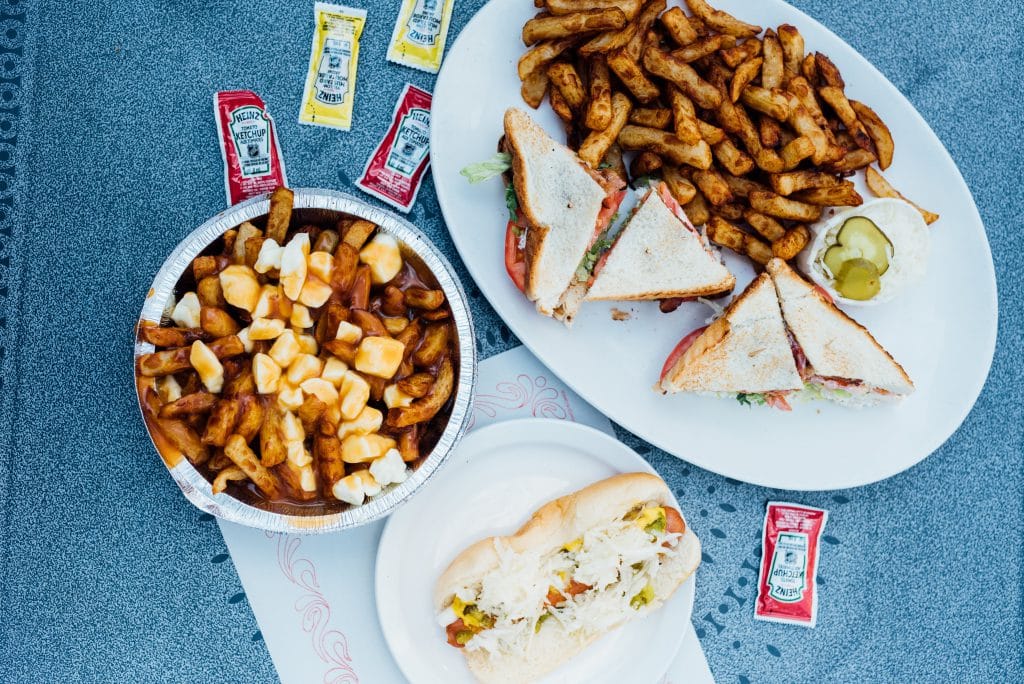 Paulo & Suzanne is open 24/7, and located right next to Sacré-Cœur Hospital. This is a Montreal landmark where some of the city’s best poutines have been served for more than 30 years. The traditional poutine comes in two sizes, small and large, and there are a dozen or so different poutine options. The service is delightful and portions served are plentiful.
Get more information 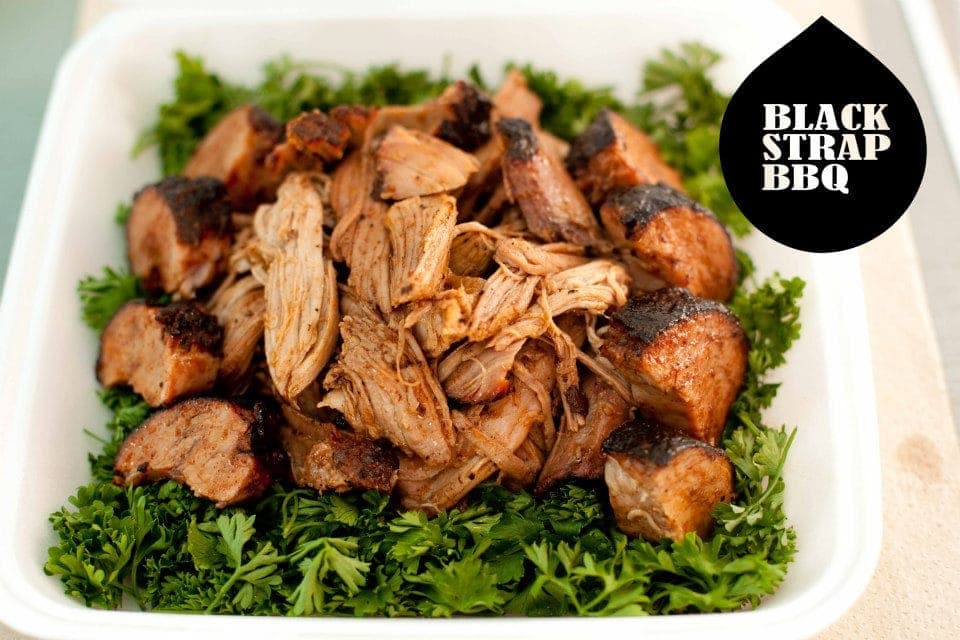 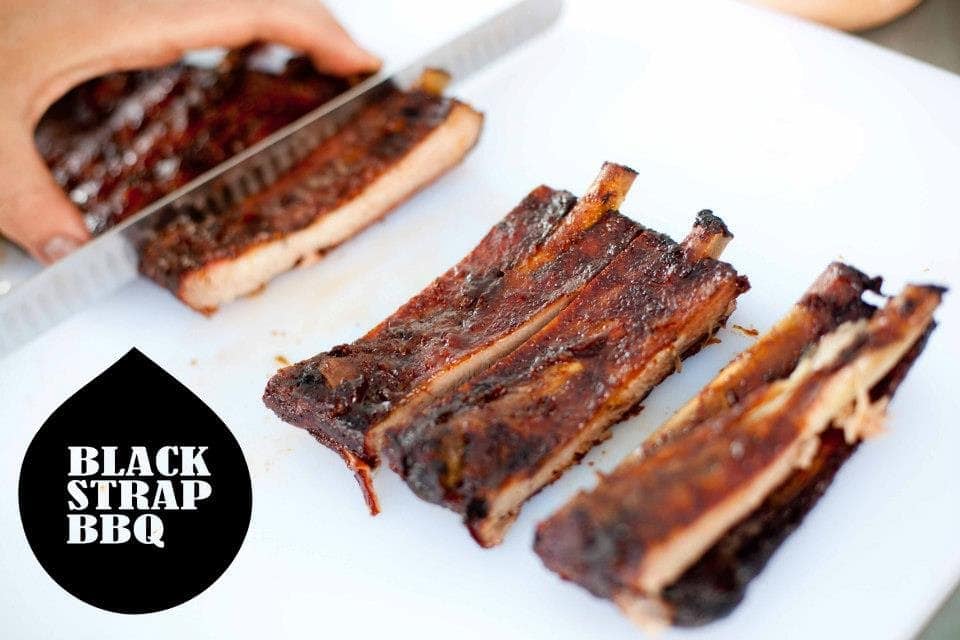 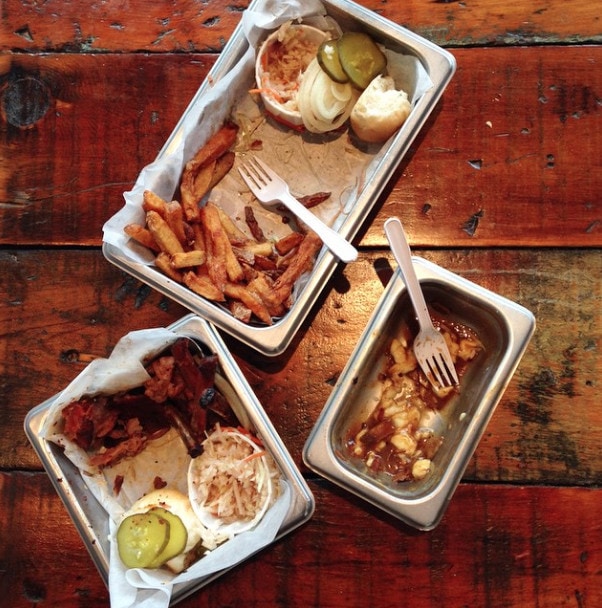 Blackstrap BBQ is a snackbar in Verdun where you can indulge in such sinful BBQ food pleasures as pork, ribs, turkey, chicken, beef breast and many other possibly forbidden cuisine delights. In addition to sandwiches and chicken wings, there are six excellent types of poutine on their menu, including the “burnt ends” version, where pieces of smoked meat are added to traditional poutine. Small or large sizes are the options.
Get more information

Fancy poutine : Au Pied de Cochon is not to be missed. This Montreal landmark was one of the first upscale restaurants to add poutine to its menu. And your not talking just any kind of poutine but poutine with foie gras. This is poutine at its best and for good reason – it is both decadent and delectable. Prepared with a gravy of foie gras and cream, then topped with pieces of fried foie gras, it is memorable. There’s regular poutine as well … just so you know.
Get more information
Ma Poule Mouillée, Rachel Street East, Montreal, QC, Canada

Ma Poule opened in 2013 at the corner of Rachel and Boyer and has turned into one of the best Portuguese restaurants in Montreal in the style of chicken/take-out snack bars. This is another spot where we devour one of the best poutines in the city! Headlined as  « Awesome, the Portuguese are doing their own poutine! », at Ma Poule you can enjoy delicious Portuguese-style poutine with São Jorge cheese, chicken and grilled chouriço. Of course, the traditional poutine is also available.
Get more information

Open since 1962, restaurant Nouveau Système is an absolute classic of Beaubien Street, and must-try for anytime that you’re on the hunt for a good old traditional poutine. Open 7 days a week, this place serves all of the typical Quebec dishes, from breakfasts to late night snacks. Regular or Italian-style, this traditional Quebecois dish is offered between $6.20 and $8.20, and is to be enjoyed in Nouveau System’s retro and welcoming atmosphere. Alison Slattery — Instagram
Get more information

Greenspot is a classic that seems to have been around forever… which may as well be the case seeing as it first opened in the 1940s. This spot offers simple and well-made fast food dishes. Their burgers, hot dogs and poutines are a blast from the past, and we love them for it! This is the type of place that we visit to soak in the retro and relaxed setting – we really feel like we’re back in the ’50s when we’re here! Greenspot is the type of place that you either love or hate, and the same goes for their poutine. We love it.  © Photo Alison Slattery — Instagram
Get more information
Broue Pub Brouhaha Rosemont, Avenue De Lorimier, Montreal, QC, Canada

Broue Pub Brouhaha is a great microbrewery in Rosemont. It offers some tasty homemade beers and a wide variety of privately imported beers. They have a distinct pub atmosphere and the place is usually very crowded. On the menu, there are 6 delicious poutines (classic, ribs, Italian, frayed, galvaude and poutiflette). The “poutiflette” poutine is made with bacon, caramelized onions, leeks, a cream sauce, cheese curds and Pied-De-Vent cheese. A beer-poutine combo that’s hard to beat.
Get more information

Le Coq de l’Est is one of our favorite rotisserie houses, and it’s located in Tétreaultville. In a simple and warm atmosphere, the charming duo of owners welcomes you to taste some of the best roast chicken in town! Evoking all the comfort of this Quebec classic, Omar, the chef, offers you an absolutely delicious take on classic poutine, with his tasty chicken with tandoori spices. An address that’s definitely worth the detour. © Photo Alison Slattery — Instagram
Get more information

Of course, when you’re thinking of Montreal poutine, you can’t forget la Banquise. This restaurant is a Montreal institution and we come here to enjoy all kinds of poutine,  at any time of the day. Yes, La Banquise is open 24 hours a day, seven days a week! Among the most popular with customers, there are variations where meat is in the spotlight, such as the T-Rex (ground steak, pepperoni, bacon and hot dog sausage) and the Fred Caillou (ground steak, smoked meat, spicy sausage and merguez sausage). There are also more surprising flavours, such as La Taquise (guacamole, sour cream and tomatoes) and La Sud-Ouest (bacon, red onions, guacamole, onion rings and Chipotle sauce). © Photos  Alison Slattery — Instagram
Get more information
See on the map
× See the full information
I would like to propose an edit to this article

Montreal’s best poke: where to enjoy this most delicious food

Best poke: Eating raw food is very popular nowadays. This trend also includes raw fish and meat, found in dishes like sashimi, sushi, carpaccios and tartares. And now there is […]