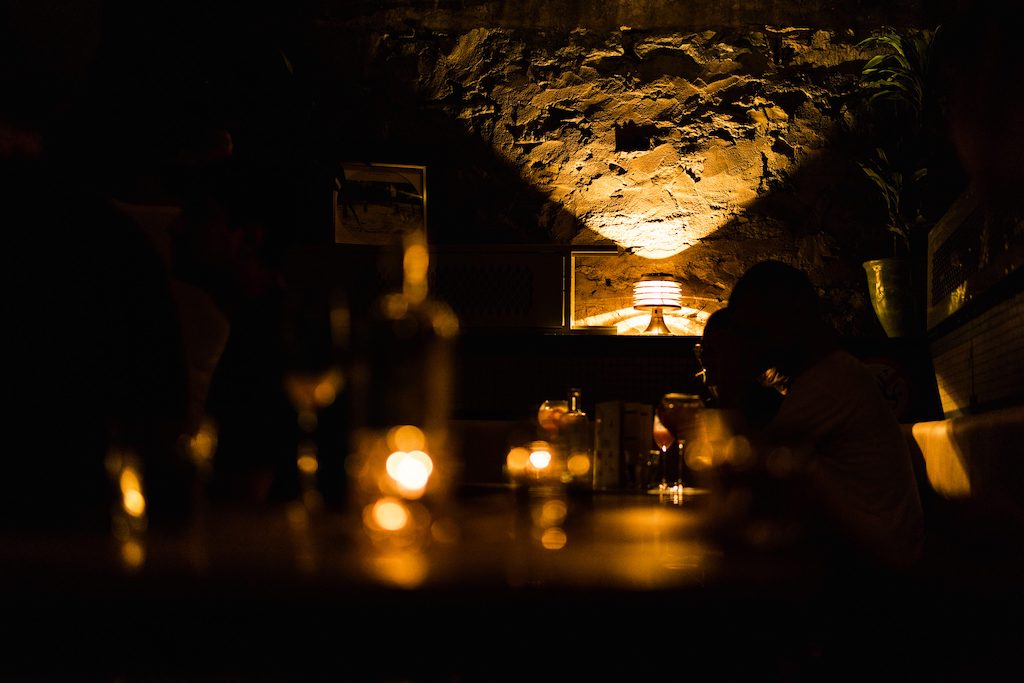 Club Pelicano jumped into the deep end of the Montreal cocktail bar scene when it recently opened in the basement premises of Tiradito. Located in the heart of Montreal’s business core, Club Pelicano proposes a great selection of cocktails and natural wines, together with some delicious small bites.

This is the latest venture from the owners of Tiradito – David Dumay, David Schmidt, Sébastien Jacques and Marcel Larrea, and if you can’t swim, get ready to put on your water wings because the space harks back to the days of the public baths and swimming pools. The difference is that in this case, you are sipping your drink, allowing yourself to escape the daily grind by thinking of those glorious Mediterranean summer evenings. It’s a great idea, especially because in the area there is nothing quite like Club Pelicano.

“Pelicano” is the name that David Schmidt came up with and it is a nod to Club Piscine, a Quebec company in the business of everything related to pools, and some. The owners’ main inspiration, nevertheless, comes from the legendary Piscine Molitor in Paris, an Olympic-size pool in a complex designed in an extraordinary Art Deco style to look like an ocean liner, complete with stained glass windows! It opened in 1929 and Johnny Weissmuller, then an Olympic swimmer (known later as Tarzan!) was invited to the ceremonies. Let’s head downstairs into the Club, where you are drawn back into the Paris of the 30s & 40s when Piscine Molitor was sometimes emptied to stage events and celebrations of all kinds. This is the kind of cachet that Club Pelicano can brag about – there is an aura of this Art Deco pool look. The hues of pastel colors, the thousands of small square tiles on the walls with their numbers and direction indicators, and the thousands more of dark blue ones on the floor aka swimming pool, are synonymous with this era of public pools. David Schmidt explains that all these details are references to the many public baths everywhere that have, over time, been transformed into cultural spaces.

The imaginative cocktail list is the combined effort of two mixologists – Alexandre Beaudin (Rouge-Gorge, Le Royal), and Dimitry Saint Louis (Nacarat). They invite us to dive into their creations of many flavors that reflect hints of their own trips, with such tastes of fruit, vermouth, sherry and other fortified wines. Try the Nuñua Sour, a revisited Pisco Sour which Alexandre first discovered during a trip to Chili. For those wine drinkers, there is an emphasis on natural wines, as is evident in the wine list carefully crafted by Sebastien Jacques (Pullman, Furco Wine Bars), and Emmanuelle Tallier (Atelier Robuchon). And the beer choices are based on selections from local breweries.

Marcel Larrea (Tiradito) and Fabrizia Rollo (Fabrizia-the fresh pasta resto), have taken on Club Pelicano’s menu. Mediterranean-flavor tapas are being developed, based on the numerous trips the owners have undertaken around the world. These are “de luxe” small bites to be enjoyed with your drinks. We really like the fried olives, bison and octopus. And knowing that there will soon be Lobster Rolls and Steamed Bao Buns, we’ll be heading back to Club Pelicano.

The interior surroundings are a great reason to head to Club Pelicano, as are the cocktails, natural wines and small bites. There will be Afro evenings and Italian-disco evenings every Thursday, Friday and Saturday, with a local DJ. But have you got your swimsuit ready? No sunscreen needed!

The Best Indian Restaurants in Montreal : our suggestions India is a huge country – the seventh largest in the world, and it is home to the second highest population […]