No restaurant, bar or cafe pays to appear on TASTET!
Back 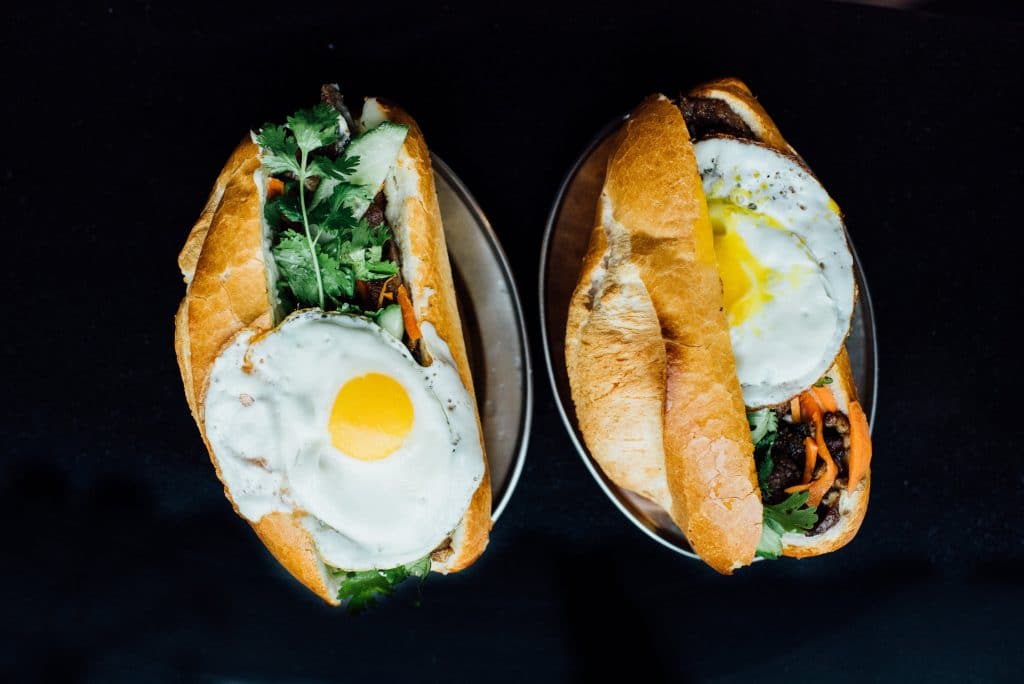 Bánh mì a Vietnamese word meaning “wheat bread” – and also the name for the delicious Vietnamese sandwiches that are eaten if you are in a hurry. It may be a simple sandwich but Bánh mì are all about the flavours!

The staple of this food is the Vietnamese baguette, a legacy of the days of French colonialism in Asia. These baguettes are smaller than the French version and are made with a mixture of wheat and rice flours so the result is a thinner and crustier baguette.

Banh mi are filled with raw vegetables and meatballs (Banh mixíu mại) or pâté (Banh mi pâté). They combine French-influenced ingredients such as pâté, as well as Vietnamese-inspired ingredients like carrots, pickled white radishes, cilantro, soy sauce and meat. Banh mi can include other fillings too, like grilled pork meat, grilled chicken, Silkie chicken, sardines with tomato sauce or pork meatballs in tomato sauce. Mayo can also be added.

In Vietnam, these sandwiches are served with a spicy sauce made from a chili base but here, the sauce is replaced instead by sliced jalapeños. Another variation is found in southern Vietnam and western countries where mayo, butter and egg yolks are added.

The classic Banh mi is served with pan-fried pork slices, pork patties, pork liver pâté, pork bristle and head cheese. The veggie version (Banh mi chay) is made with tofu or seitan. And we are seeing a breakfast version more and more, made with fried eggs, onion slices and served with butter or soy sauce.

Banh mi are a bit like our basic ham and cheese sandwich and they are found on every street corner in Vietnam. It’s simple, easy to carry and ideal for eating-on-the-go. All the big cities in the US have adopted this delicious food and now in Montreal, several restaurants have incorporated Banh mi into their menus. So here is our list of the best Bánh mì in Montreal: 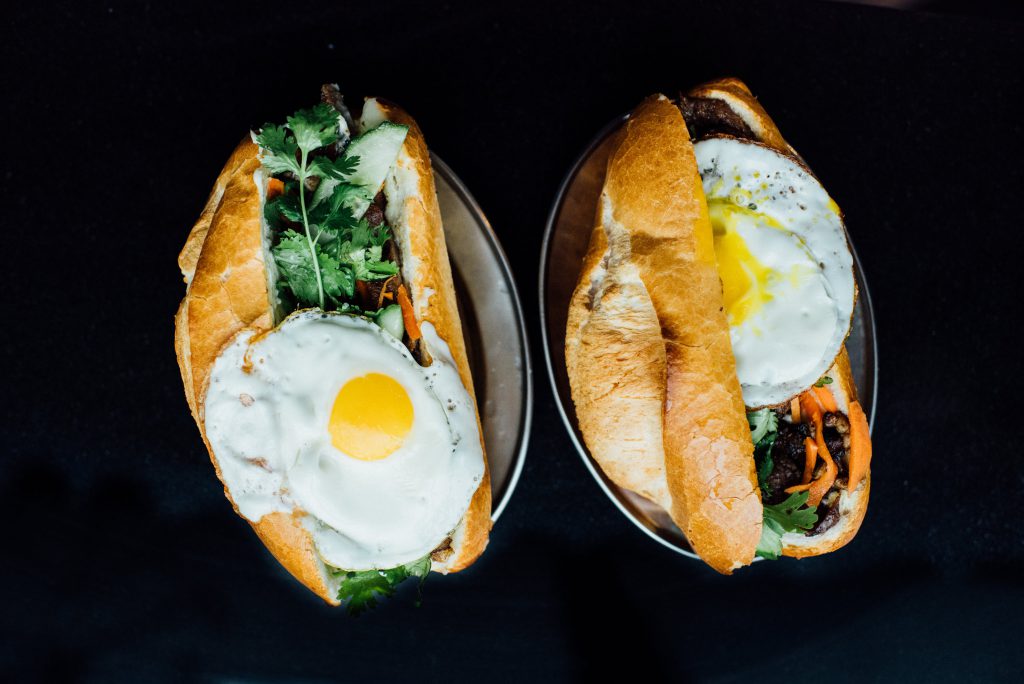 Tran Cantine is a small Vietnamese restaurant that opened in the late spring of 2017. It is located on rue Notre-Dame Ouest at the corner of rue Courcelle and every item on the menu is affordable. Everything at Tran Cantine is homemade, from the soup broths to marinades. The succulent Banh mi come in your choice of chicken, beef or pork and if you want, add an egg or some side-dishes to your order! These Vietnamese specialties are delicious and the service is exceedingly friendly. St-Henri will enjoy having Tran Cantine in the heart of the neighbourhood!

Sue’s on rue Beaubien Est serves flavourful and hearty Vietnamese sandwiches!  In a nice setting, there are eight delicious Banh mi options on the menu to choose from, including the traditional (liver pâté, BBQ ham and Vietnamese sausages), a veggie (purple cabbage, cucumber, marinated carrots and daikon), Auber-Chine (Chinese eggplant sautéed in a Szechuan sauce) and Shiitake (fresh mushrooms sautéed in soy sauce). All Banh mi are prepared with homemade aioli, cucumber, cilantro, carrots and marinated daikon, spicy mayo and jalapeños: every one is a delight!

Báhn Mì 79 prepares some of the best Vietnamese sandwiches in downtown Montreal. The Báhn mì served here came recommended by several food enthusiasts and we were not disappointed! They are really fresh and delicious and the service is very friendly. Coming here for a quick lunch and a good Bành mí is well worth it.

Located on rue Jarry Est in Villeray, Banh mi Saigon serves delicious Banh mi at low prices. Run by the former owner of Café Saigon, the choices include chicken, pork, beef and minced pork. There is also a special Banh mi with Vietnamese ham and pork, and nem (grilled Vietnamese sausage)! If you are in the area, do drop in and try these Bánh mì.

This unpretentious little restaurant on rue Fleury Est serves good Banh mi but there’s more on the menu to choose from : soups, noodles, rolls, stir frys and several traditional Vietnamese dishes. Café Banh mi Linh is one of its places where you eat well, discover delicious small snacks and all without putting a hole in your pocket.

Located in a basement on rue Saint-Denis, Vua is a must for students or anyone wanting to savour good Asian food on-the-go! This small snackbar with only a few seats has more than 15 options of delicious Banh mi in 7″ and 10″ sizes.  There is also prepared food, sushi, salads, dinners and many deli products.

Concerned about the origin of their meat, the owners of Restaurant Lawrence decided to open their own butcher shop and in June 2013, Boucherie Lawrence opened its doors. A butcher’s shop with a streamlined design but above all, offering local and organic products where you come to purchase meats, charcuteries and delicious sandwiches, all made with ingredients from small producers and very small farm holdings in Quebec. So you may ask why this is in our list? Because among their sandwiches, there is an excellent Banh mi!

In a charming setting, Santa Barbara offers a vegetarian menu with colourful and tasty food. Croquettes, nachos, salads and other selections will tempt you – the food is superb and consistently very good. Santa Barbara has a seasonal menu that always includes non-veggie options. And their Banh mi served at breakfast are truly delicious but don’t forget their Brunch which is exceptional!

Located in the heart of Mile End, Cantine Brooklyn is an all-in-one restaurant, furniture shop and work space. Brooklyn proposes a fast-food-style menu, rich in fresh ingredients with seasonal accents. Try a pork Banh mi on a baguette with pickled vegetables, cilantro and a delicious sauce. The space is ideal for a small snack, where you can relax and take in all the furniture  – which is also for sale!

Learn more
Suggest an improvement to this article