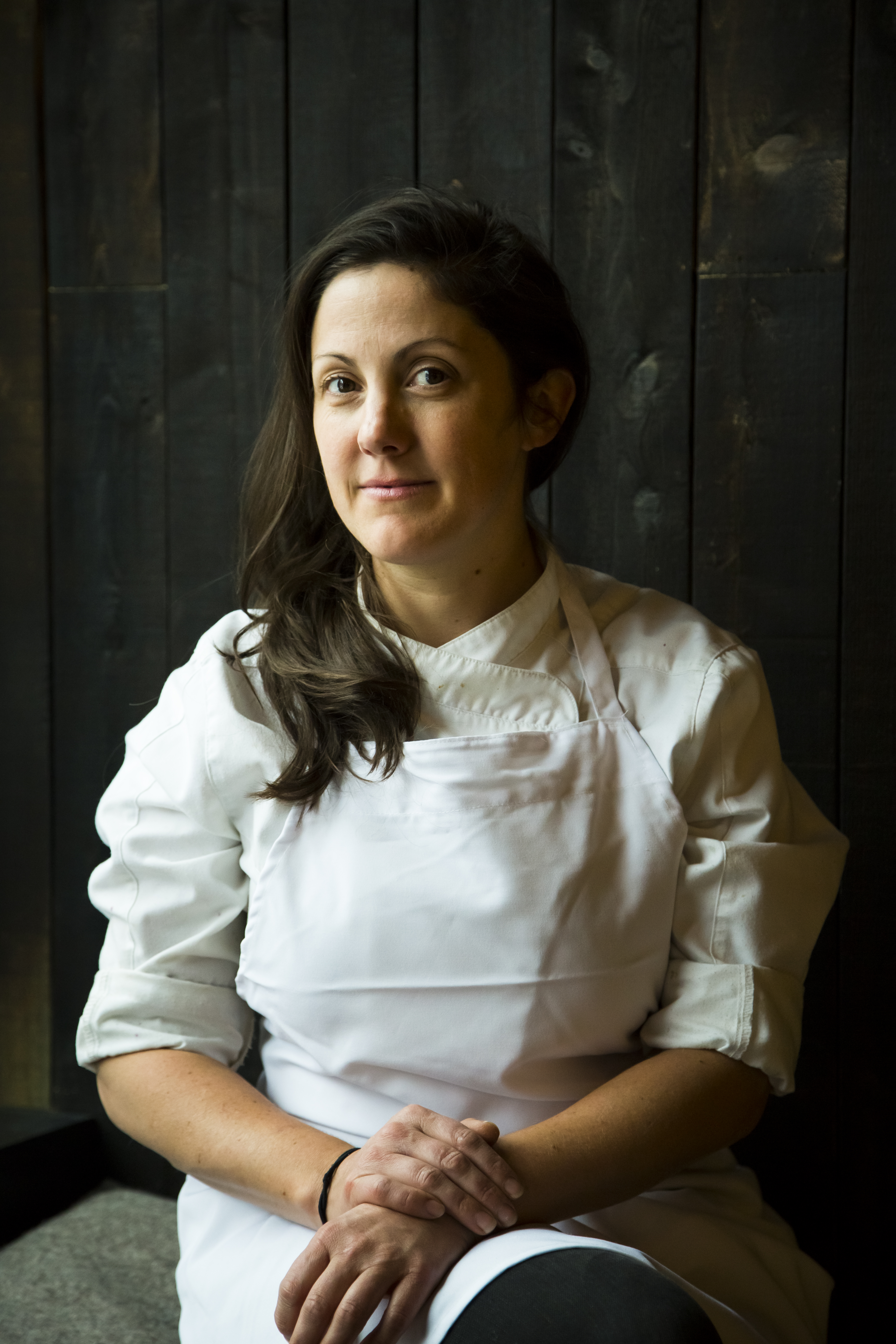 Did you know that many of Canada’s most celebrated chefs use maple from Quebec all year long? In an effort to remain local and to highlight the natural flavours of Quebec’s terroir, kitchens are opting more and more for Quebec’s high quality maple products as an alternative to sugar. This series of portraits will shine light on some of the most impressive culinary talents, all of whom use Maple from Quebec products in their cuisine, throughout all four seasons.

Stéphanie Labelle specializes in all things sweet, but this ambitious talent cannot be so simply encapsulated. As the owner of Patisserie Rhubarbe and Comptoir Rhubarbe, Stéphanie is leaving her mark on Montreal’s gourmet landscape and helping to mold its future, one dessert at a time. With creativity and hard work at the forefront of her journey, we are in constant anticipation of her next step!

“I’ve always made food with my mother. Especially desserts! She had a sweet tooth, so sometimes we even ate pancakes with syrup for dinner! We never went out to restaurants because my mother did most of the cooking herself – she took cooking lessons with Lucy Waverman when she lived in Toronto. I also had an aunt who did wild things with food, much in the same vein as Martha Stewart. To say the least, I was always interested in cooking, but definitely never considered turning it into a career.”

Despite her natural interest in the culinary field, Stéphanie enrolled in CEGEP and started working towards a diploma in the sciences. “My mother pushed me to do sciences. In my family, becoming a pastry chef wasn’t really even an option.”

But alas, as time passed and nature took its course, the idea of a life in the culinary industry became increasingly difficult for Stéphanie to dismiss. Come 2001, a close friend took off to study hotel management in Australia, peaking Stéphanie’s interests further. Simultaneously, Kitchen Confidential by the beloved late chef Anthony Bourdain became her book of choice, and ultimately changed the way she understood the restaurant world. “When I read that book, it hit me so hard in the face! The gourmet world as described by Anthony Bourdain was so far from what I knew. I knew nothing about the lifestyle of excess and delinquency that is notorious of the industry. This environment, so different from the classic 9 to 5, fascinated me; I found it extraordinary that a team of enthusiasts could come together every single day and create something great. This universe, in all of its madness, intimidated me a lot, but it also made me want to take that same intensity and channel it into my own creative vision.”

Finally submitting, Stéphanie Labelle enrolled in the pastry making program at the Institut de Tourisme et d’Hôtellerie du Québec (ITHQ) that very year. Although this may have been the first step, her career in the field was still uncertain. Her time at the Institute was the ultimate industry training ground; she made several connections with knowledgeable and talented professionals, including the renown pastry chef and chocolatier, Patrick Chevallot.

Despite Stéphanie’s newly diploma-certified love for pastry after graduating from ITHQ in 2003, the young chef was still not convinced of her career in the field… so she tacked on a degree in urban planning from Concordia University. Throughout her time at Concordia, Stéphanie worked at Les Chocolats de Chloé as a part-timer: she was their first employee!

“I have a friend who lived in Paris at the time, and she had a spare room available in her apartment. She convinced me to come and spend the summer with her in France! I applied for a work permit, and the first place I went was Pierre Hermé’s doorstep – it was a big jump. Finally, it was Colette Petrement who gave me a shot at testing my hand in a working kitchen.” For Stéphanie, the internship with Colette was decisive. After only one month as an intern, she was offered a job. Accepting the position was the last leap of faith in finally embracing her future path as a professional pastry chef – and a great one at that.

With the expiration of her work visa on the horizon and one year of working with Colette Petrement under her belt, Stéphanie came back to Montreal and started a new job at restaurant Decca 77.  In 2007, she moved on to a new position at restaurant 357C, where pastry chef Bertrand Bazin (Café Bazin) manned the ship. Working alongside Bertrand Bazin and his partner Hans Brouillette, Stéphanie was truly learning from the best! Not too long after, she left 357C and began work at La Salle à Manger on Mont-Royal Avenue East. There, Stéphanie took responsibility for the breads and pastries for over a year before she prepared to launch the first project of her own: Pâtisserie Rhubarbe.

Rhubarbe on the horizon

It’s in no way surprising that embarking on a venture of her own was the next step for Stéphanie’s career. Now with a toolbox fully equipped with the knowledge, skills and best kept secrets of some of the industry’s top pastry chefs, the only component missing was the business plan. With determination at her back, she went back to school to complete a short program in business creation.

After finishing the program, the next hurdle to overcome was the issue of funding. “The banks did not want to invest in the solo business project of a 27-year-old girl. They refused to give me any money – I found the situation to be really unfair. In the end, my parents lent me the money I needed to get the business up and running, which I later payed back in entirety.”

Finding the perfect location was the last piece of the puzzle, so when Stéphanie Labelle discovered the perfect space on rue De Lanaudière, the opening of Pâtisserie Rhubarbe was now in sight. With the help of her family, the space was renovated from A to Z to finally transform into a pastry shop.

October of 2010 marked the long awaited ribbon cutting of Pâtisserie Rhubarbe. Success happened quickly. “I think one of the keys to Rhubarbe’s success was that we really ended up in the right place at the right time. It wasn’t easy at first, because we were constantly being asked by customers about why there were only minimal pastries in the display case. We didn’t have the same degree of abundance as many other pastry shops too, so people were caught off guard. We explained to them that we adopted the approach of producing less, but always fresh and high quality products. They soon saw the value of this for themselves, because after tasting our pastries, the support was consistent!”

Of course, we can’t give all of the credit to good timing, especially when Stéphanie makes such incredibly delicious pastries. Originality, quality and freshness have always been at the forefront of her creations – Rhubarbe brought something new to the dessert scene in Montreal. “Shortly after our opening, Marie-Claude Lortie wrote an article in La Presse stating that if she was looking to order a Christmas yule log, it would have to be from us! That small article did a whole lot for us in terms of visibility.”

After only one year of being open, customers were stopping by at steady rate, both for  Stéphanie’s remarkable pastries as well as the delicious brunches that she had added to the menu. The frequency of customers coming and going soon out paced the pastry shop’s production rate, so only four years after opening, the team’s only option was to expand. “We decided to rent a garage in the alley! We had small margins and to make money, it was necessary to increase production which could only be done in a bigger space.”

“One of my greatest prides is that I don’t owe anything to anyone. We opened with such a small amount of money, and it would have been impossible to do the same thing today. I opened Rhubarbe at the best point in my life; I was a little young, but frankly, I had a lot of energy and a lot of carelessness. Because I wasn’t indebted to anyone, I was able to invest myself 300% into the project.”

2017 was a big year for Stéphanie Labelle.  Pâtisserie Rhubarbe made the move to a much larger location on Laurier East. At the same time, Comptoir Rhubarbe, the newest edition of  Pâtisserie Rhubarbe that is dedicated to savoury treats, was established in the former space that was formerly the original pastry shop. Alongside chef Julien Joré, Stéphanie created the second establishment so that it perfectly complimented everything that the original stood for. Because quality ingredients and mindful consumption were key to Stéphanie’s philosophy, Comptoir Rhubarbe allowed them to manage stock, and use any of the ingredients that couldn’t be used at the patisserie.

Freshness is undeniably a defining characteristic of everything Rhubarbe creates. “You never serve a cake that’s not fresh. That’s what makes all of the difference – small scale production and a highly refined final product. It’s fun that our customers appreciate it as much as we do!”

In addition to the freshness, the flavours of each product are perfectly balanced. Stéphanie, who is constantly reducing the amount of sugar she consumes, incorporates it rather judiciously into her products.

Today, Stéphanie Labelle still mans the ship that is Rhubarbe. She continues to create beautiful desserts that are elegant, artistic, and of course, comforting. “There’s something absolutely magical about baking. It’s amazing to start from something very small and watch as it evolves into its final form. I like to explore the full potential of the ingredients I use, and discover the magic that can happen with a bit of time and technique. Even today, when I put the choux pastry in the oven, I get chills!”

Stéphanie Labelle is endowed with an extraordinary talent, but the story of her career sheds light on her impressive work ethic and dedication. Ambitious, inventive and curious, this young pastry chef make some of the best desserts in town. We strongly advise you to come see for yourself.

Smoothie Bowls in Montreal: where to find the best

Smoothie Bowls in Montreal: where to find the best It’s hard to believe it took us this long to join the band wagon, but here we are… and we’re not […]

Bête à Pain Griffintown: A bakery just as it should be