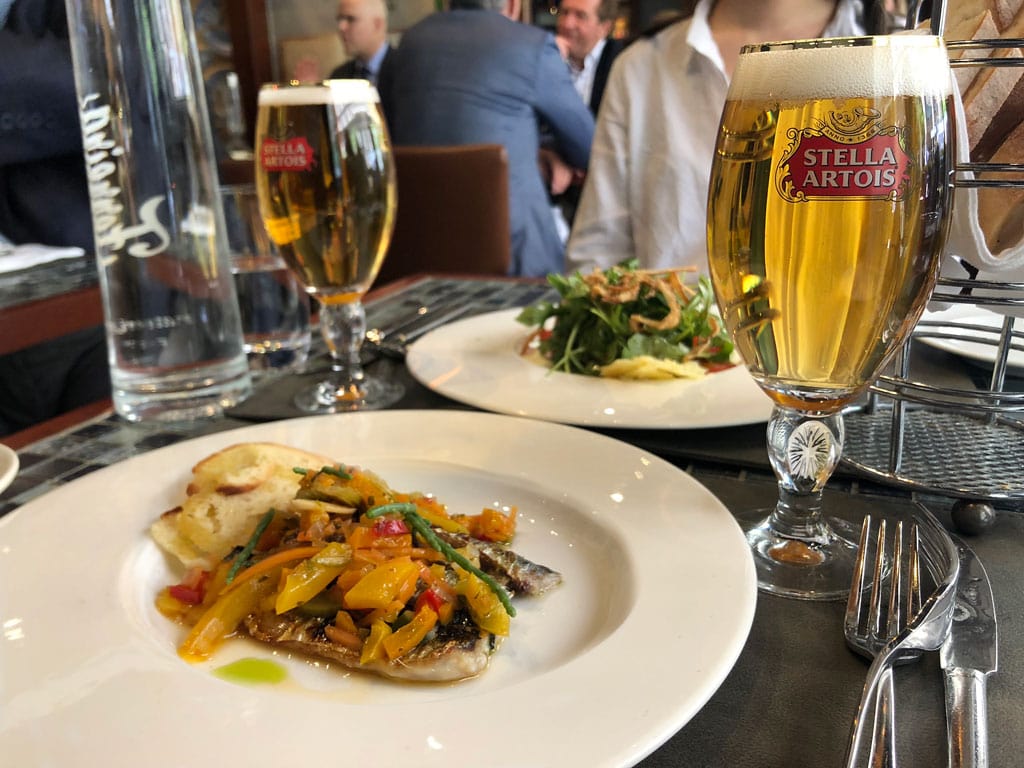 Beer – what could be better than quenching your thirst on those hot summer days with a cold beer!  Did you know that after water and tea, more beer is consumed around the world than any other beverage?  And we don’t drink just any beer, because there are many different types such as a blonde, brown, red or white beer. There are ales, there are pilsners, and some like strong beers, some like them light, it just depends on how we feel and when dining, what beer works well with the food we are eating. The basics of beer are pretty simple – the fermentation of barley and hops to create an alcoholic beverage and with the thousands of different beers being brewed nowadays, there is certainly a beer out there for you. Yet, when you want a beer with your meal, the stakes are raised to find the right beer for the right occasion.

This article was created in collaboration with Stella Artois, whose roots as a brewery date back to the early 18thcentury in Leuven, Belgium, a country known for its beer. In fact, the tradition of brewing beer dates back to 1366 (to be precise!). Stella Artois produced some of the first Belgian beers in the world and you can now drink your own Stella in more than 95 countries!  Beer’s malty taste and hint of bitterness is a great match with so many kinds of cuisine. Stella Artois has recently launched their “Joy of Beer” campaign whose message is that you should put down your phone and pick up a Stella, highlighting how much fun it is to spend time in the company of family and friends, over good food and naturally, enjoying a great Stella Artois beer.

So we went out across the province of Quebec in search of 10 places where we could enjoy our Stella with a great meal and we would like to share these with our readers. By the time you reach the end, we’re pretty sure you’ll be wanting your own Stella, because you’ll be thirsty!

Previous See on the map Next
×
Learn more

1 Rue des Carrières, Québec, QC G1R 3Y8, Canada
Le Château Frontenac is without a doubt one of the most beautiful hotels in Quebec, if not Canada. A visit to the city’s Old Town would not be complete without going into this legendary hotel. Whether it’s dining on the succulent Highland beef filet from Sainte-Croix at the very elegant Champlain Restaurant, or sitting in the Bistro Le Sam, nibbling away from a plate of deli meats “Basque terroir”.  And neither to be overlooked is the hotel’s 1608 Wine & Cheese Bar, and their impressive plate of Quebec cheeses.  All these gourmet delights will taste even better once you’ve got your Stella in your hand and are gazing out onto the fabulous view of the majestic Saint Lawrence River.
Get more information

31 Boulevard René-Lévesque O, Québec, QC G1R 2A3, Canada
Right in the heart of Quebec City, Trattoria La Scala is located on René-Lévesque Boulevard. The restaurant serves Italian-inspired cuisine. You come here to eat the pasta of the establishment, paired with a glass of Stella Artois, at a stone’s throw from the Plains of Abraham, in the tourist quarters of the metropolis. The restaurant is also popular for its jazz evenings.
Get more information

3625 Rue Talon, Sainte-Catherine, QC J5C 1T1, Canada
The atmosphere at MResto-Bar restaurant in Sainte-Catherine can, at times, be lively and sporty but there’s always a certain stylish feel about it! It is an ideal place for cocktail hour, a nice meal with friends, or if you are in the area, dropping in to watch a sporting event on TV. This is the kind of setting that fits perfectly with a good Stella Artois beer, to enjoy with your food. We suggest ordering the table d’hôte, because their Top Braised Beef Rib and their house specialty “Steak-Frites” are without a doubt, that perfect match with your Stella!
Get more information

2965 Rue Picard, Saint-Hyacinthe, QC J2S 1H2, Canada
The White Rabbit of Sainte-Hyacinthe serves a well executed and comforting cuisine, with a menu composed of revisited classic dishes from Quebec. You’ll find here poutines, burgers, tartars, several cuts of meat and many others. The simple décor is welcoming and lends itself well to unpretentious meals, enjoying pretty natural light during the day and charming dim lighting in the evening.
Get more information

474 Route 105, Chelsea, QC J9B 1L2, Canada
Bistro Manchester is a friendly pub in the heart of Chelsea Village. Everyone coming here is openly welcomed and served generous portions of good comfort food. How can you not order a Stella to drink with Bistro Manchester’s famous gigantic burgers, club sandwiches, subs or snacks of all kinds. Stella Artois is the beer that pairs so well with pub food to gourmet meals.
Get more information

310 Rue Saint-Paul O, Montréal, QC H2Y 2A3, Canada
The Vieux Port area of Montreal draws many people to its restaurants, like Bocata Restaurant where the choice of tapas are numerous and are amongst our favorites. Loyal customers keep returning because of the intimate atmosphere and couples treasure the romantic feeling.  A Stella Artois beer is not only refreshing, but it cleanses the palate, highlighting the different tastes of these delicious tapas. But go further and try your Stella with Bocata’s Ribeye AAA Canadian Angus or the Fried Haddock Burger to discover how versatile this legendary Belgian beer really is.
Get more information

Bistro Le St-Charles, St-, 17680 Rue Charles #100, Mirabel, QC J7J 0T6
Enjoy bistro-style cuisine at the St-Charles, in stylish and relaxed surroundings. The specialties at this Mirabel location are based on local terroir products, such as the “Entre 2 pains” selections:  Grilled-cheese with goat cheese and duck confit, Smoked Meat from Gaspor piglet, and the BLT Special. These are all served with fries or salad but there’s something missing – a beverage. We can highly recommend a beer, but not just any beer. The best beer to complement these menu choices can only be a Stella Artois, Belgium’s best!
Get more information

312 Rue Saint-Paul O, Montréal, QC H2Y 2A3, Canada
Barroco is a beautiful restaurant excelling in French, Spanish and Italian cuisine, in the most romantic of settings. It is intimate yet the atmosphere is festive. We sat at our table, with our Stella Artois beer, and went slowly through the mouthwatering choices on the menu. The winner was the Quebec Ribeye AAA Angus Beef, roasted with rosemary and thyme, and served with truffle butter. The blend of the Stella’s hint of malt with the savory beef was just the perfect combination.
Get more information

46 Boulevard Champlain, Québec, QC G1K 4E8, Canada
Cochon Dingue is a flagship restaurant in Quebec City with 5 locations.  It is known for its lively breakfasts and lunches, where you can sit back and enjoy both classic and maybe less-classic dishes prepared with Quebec-produced food. We chose a late brunch from their selections of a Lunch Poutine, Casseroles of scrambled eggs, Benedictines (poached eggs with hollandaise sauce plus choices of different garnishes), omelettes, or sandwiches, guaranteed to go down well with a cold Stella Artois beer! The other perfect combo is a Stella with the classic steak-frites.  Not only are the servings generous at Cochon Dingue, but with that Stella in your hand, you’ll feel like you’re in Belgium!
Get more information

326 Rue des Forges, Trois-Rivières, Québec, Canada
Le Pot Papilles et Cocktails is a casual restaurant and if you are in Trois Rivières, a visit here is a must. This is a very popular place and the surroundings work well for all different occasions – business lunch, cocktail hour, romantic dinner or an evening with friends.  The tartares are what we come for – and our Stella Artois, because all the different tartares taste that much better with a refreshing Stella. Imagine not just a classic beef tartare, but a spicy tartare, or buffalo and bacon tartare, (there are 6 to choose from), each one tasting even better with every sip of Stella. The same goes for the delicious charcuteries et cie. and the generous generous BFK burger – don’t forget the Stella Artois!
Get more information
I would like to propose an edit to this article

Omnivore is a “healthy fast food” restaurant with very good food! Located on Blvd St Laurent, right on the corner of rue Marie-Anne, Omnivore serves up a very price-conscious menu, […]